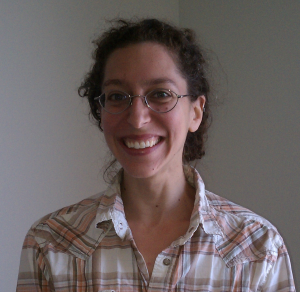 Ms. DuBoff works on and off-Broadway, for National Public Radio, on various popular television shows, and in independent films. She was the winner of the 2011 Obie award for Sustained Excellence of Sound Design, the Lilly award for Seriously Stunning Sound Design, the Ruth Morley Design award, as well as various Drama Desk and Henry Hewes nominations. In the 2014-2015 Broadway season Jill du Boff’s work was heard in Hand to God, Disgraced, and The Heidi Chronicles. She balances an active theater career with being the Audio Producer at The New Yorker.

Below she takes a moment from her busy schedule to answer our questions!

The Legend of Georgia McBride at MCC.

Where were you born?  Where do you live now?

I was born just outside of Manhattan, and live in Hell’s Kitchen now, but will be moving to Prospect Heights in October.

I designed a show called Spatter Pattern at Playwrights Horizons, and working with composer Michael Friedman on that show was a very unique and successful symbiotic collaboration.

My husband, my family and my friends.  Without them I would be at sea most of the time.

I’ve just gotten into Miranda Lambert and the Pistol Annies.  Really anything by them.  For now.

Where to start?  I think that when people list all of the things on their personal to do list, or things that don’t effect the group, during a production meeting after a 10 out of 12, it’s inconsiderate.

Describe the most ridiculous production situation you’ve ever experienced.

I was working on a show, and the director wanted a certain cue in the preshow mix.  She named the correct band, but gave me the wrong song title.  When it came on she screamed at me in the back of the house, “No, I wanted ‘Middle of The Road’!  The Times will be here tonight and this has ruined everything!”  The show didn’t start for another 20 minutes because we were waiting for the Times critic to get there.  He missed most of the preshow mix anyway.

It depends on where I am, but anything that I can eat during dinner break, and take back and continue to munch on during the evening session is always a bonus.

Was there a show or experience which drew you to sound design or composition?

I was the sound op on The Grey Zone at MCC, designed by David Van Tieghem, and when I saw what his music and underscoring did to the audience every night, I knew that I wanted to be a part of a profession that could create something so powerful.

They do now.  When I first started out, they would tell people that I was a lighting or set designer.  Now they have something to say about the sound in every production they see!

David Van Tieghem is my mentor.  He taught me how to design and gave me the tips and tools I needed when I was starting my career.  I still go to him for advice.

Mostly in music, but also in art and movies.

I hope that it will be able to enlighten people as to what we do as well as make the discipline more understandable and accessible.