Sound waves emanate from an object, which is in contact with a medium of transmission, and eventually is perceived as sound. We usually think of sound traveling through air as the most common medium, but sound waves can also pass through solids and liquids at varying speeds. The human ear has a very intricate system of intercepting these sound waves and brings meaning to them through the auditory nerves in the brain. This produces the second meaning when we speak of sound, a more physical and emotional sensation of hearing, which is how the sound feels, such as “the crickets at night are very peaceful.” This page will focus on the first meaning, the actual transmission of the sound wave and how the minute variations fluctuate above and below atmospheric pressure causing waves of compression and rarefaction.

The inverse square law which states that the further a sound wave travels away from the point of actuation, the less the intensity of pressure change occurs. To human ears, this to us sounds as if the sound is getting quieter when in reality the atmospheric changes are getting smaller with distance and time. Over time, the energy dissipates. At the point of emanation, the energy of the sound occupies more physical space. As it travels, and we encounter the sound at a single point of reception in a broader area, it appears to be quieter. Outdoors, with no reflecting or absorbing objects, sound will behave in accordance with the inverse square law; this condition is known as a free field. There is nothing interrupting the flow of energy from the point of emanation to the point of reception.

A sound wave cycle is determined by measuring the initial increase in atmospheric pressure from the steady state, followed by the corresponding drop below the steady state, and then the return back up to the steady state. The sound wave is in reality squeezing together atmospheric particles more than normal and then is pulling them apart further than normal. When you factor the rate of this into the equation, the faster the object vibrates the more wave cycles are produced per second. The amount of wave cycles that occur in one second is expressed as the frequency of the wave. The greater the number of vibrations, we define as a higher frequency of a wave cycle, which gives the perception of being higher in pitch. The fewer the number of vibrations, we define as a lower frequency of wave cycle, giving the perception of being lower in pitch.

Frequency is relative to pitch in our perception, but pitch is a subjective sensation. You may not be able to hear a change in pitch with a very small change in the frequency of a sound wave. These frequencies were named after Heinrich Hertz, and the term Hertz (Hz) measures the wave cycles per second. If the frequency is over 1000 Hz, we specify this with the suffix kiloHertz (kHz). For example, a sound wave measuring a frequency of 15,500 cycles per second would be notated as 15.5 kHz. Perception of these waves varies from person to person, taking into account age and gender. The perception of the lowest audible frequency is around 15 Hz. In the perception of the higher frequencies is where you see the greater variance. Young women tend to have a higher range of hearing, up to 20 kHz, when the average high range is around 15-18 kHz. With age, and exposure to high decibel levels of sound pressure, the ability to hear high frequencies declines. Sound pressure levels are measured with the decibel scale sound pressure level (dBspl). 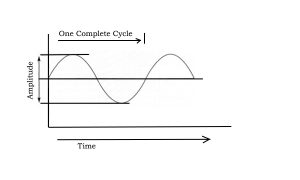 In this diagram of the sinusoidal (sine) wave above, the steady state is the line in the center. The initial compression of atmospheric pressure takes the wave above that steady state. The corresponding decline below the steady state is the rarefaction of the atmospheric pressure. One full period is noted when the pressure comes back up again to the steady state. Assuming an impulse sound, Amplitude, or the height of the waveform, will change through the amount of change in pressure over time. At the start of a wave, you’ll find a greater distance from the steady state, and with time, in a free field, the size of the pressure diminishes until negligible and the amplitude (height) is smaller. To the human ear, Amplitude equates to loudness.

Sound travels through, around, and bounces off anything that is in the path of the wave; every object with mass, with which a sound wave comes into contact, will vibrate as well. This vibration of another object through sound is considered the resonant frequency of that particular object. When sound bounces off of an object it is considered the reflection, which is similar to the way light bounces off of a mirror. Light particles are very small in comparison to sound waves, so especially low frequency waves (larger in size) will only reflect off of certain sized objects. The size of the object will determine the frequencies that will flow around and reflect off of it. If an object is between you and the source of the sound wave, the object creates a shadow of itself between you and the source, and diminished perception of frequencies occurs because of the absorption and reflection that object causes. Harder reflective objects act as rebound for the wave, and softer absorbing objects soak in some of the energy of the wave.

When sound bounces off of ceilings, floors, and walls, the reflections combine with the original wave and have different effects on a listener depending on where they interact with the sound. The closer you are to the source of the original wave, the less you will hear the reflected waves. The further away you are from the original source, the more the combined effect is apparent and can at times obscure the original sound wave. What is called the critical distance is the point where the energy from the original source equals the energy from the reflections. This can vary according to the acoustic conditions of the space in which the sound is traveling. When you reach the point in the space outside of the critical distance where the reflected sounds diffuse the energy of the original source, this is called the reverberant field, and you will lose clarity in the effect with a longer reverberant time. This is not to be confused with an echo, which is when sound waves bounce from a highly reflective surface and repeat.

Sound Designers understand the way sound is generated, moves, reacts, and dissipates in any environment. It is the foundation to the understanding of what happens when human beings come into contact with sound.