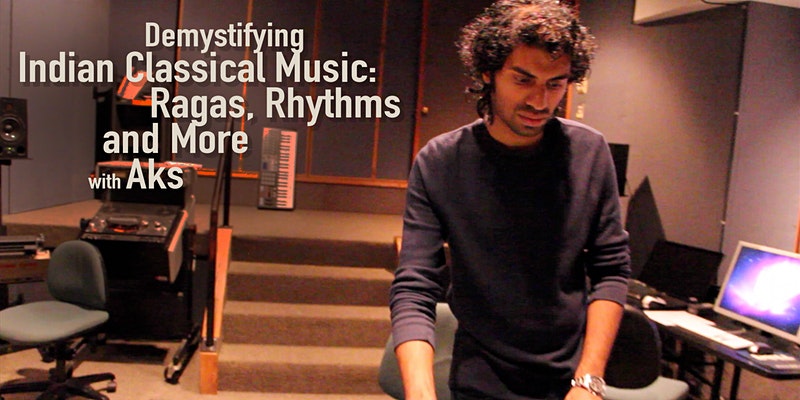 In this seminar, we will explore the building blocks of Indian classical music including the raga system, common rhythmic patterns or tala, and applying these concepts to composing cues for film & TV.

Aks has his musical roots in a family of professional classical Indian musicians in Maryland. He studied vocal music for over 15 years, as well as Carnatic violin and mridangam (percussion). Growing up in a predominantly African-American community, his early influences included hip-hop and RnB – in addition to Bollywood and Western classical music. These genres influenced his unique compositional style, which he developed in his college years. Thereafter, Aks received an opportunity to study with AR Rahman at the KM Music Conservatory. After placing first in the class, Aks was invited to work in the studio alongside Rahman on the Bollywood films Raavan, Adaa, and Delhi 6. He also toured as a musician and vocalist on Rahman’s live shows.

Aks later diversified into composing for his own media projects. In 2012, he formed his music and media company Eclipse Nirvana. With his wife and musical partner Lakshmi, Aks began producing albums and live shows of Electronic Bhakti Music. Aks & Lakshmi have released 8 studio albums including The Bhakti Movement with Sony Music, and perform shows featuring ancient Indian poetry across the US and abroad.

Aks has composed music for over 150 original songs. In 2016, Aks scored the feature film Cold Pressed, a thriller about fake olive oil distribution by the mafia directed by Viknes Silvalingam. In 2017, he completed work on The Princess and the Pauper, a children’s adaptation of Mark Twain’s classic novel by Anu Yadav and Imagination Stage.

Aks attended UCLA’s Film Scoring program from 2018-2020. During his time there, he was awarded the prestigious BMI Jerry Goldsmith Film Scoring Scholarship. Soon thereafter, he established Eclipse Nirvana Studios in West LA where he currently writes for film & tv, commercials, and video games.

He lives in Playa Vista, CA with his wife and son.