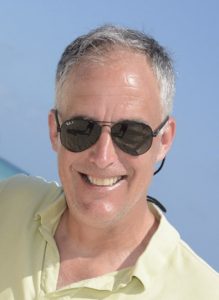 We’re (Acme Professional Inc) finishing up installation of a 4K Digital Cinema Screening Room and high-end Cabaret sound, video & communication system at The FAENA Saxony Hotel in Miami Beach, FL.  Next we move across the street to outfit the OMA-designed FAENA Forum Art Exhibition and Event Space.  We’re also completing design documents for the new Multi-Form Theater at the Dr. Phillips Center in Orlando, and just beginning design of a big upgrade of the SVC Systems for the Corbett Center at the Cincinnati Conservatory of Music.  Happy to be working with Jeremy Lee on that one.

Born and raised in Bergen County, NJ, about halfway between, and 9 miles west of, the Tappan Zee & GWB.

Living since 2001 in South Norwalk, CT in a funny little enclave that time forgot called Harborview.  Superstorm Sandy knocked us around pretty good– 16″ of seawater on the Main Floor led to elevating our house 6-1/2′ to get out of harm’s way, but 999 days out a thousand Harborview is a really beautiful place overlooking the Long Island Sound.  It’s a fantastic place to bring up kids– a real community.  And quiet.

The original SideShow was a magical experience.  Everyone was on the same page from day 1– creators, designers, cast, orchestra, crew.  Every day was marked by forward movement towards a communal goal.  Plus there was a harp in the Pit!

Acme Sound Partners proved the adage that three heads are better than one for a long time.

What led to you forming Acme Sound Partners?

I had “given up” the theater in 1995 to become a consultant.  During my interview with Artec Consultants, Russell Johnson (Artec’s founder and genius acoustician) said he’d only hire me if I kept designing shows because he believed that good sound system designs usually came from people who actually used and depended on them every day.  Once I began work at Artec and had a steady paycheck, the quality of my sound design work mysteriously improved and I eventually found myself with several great opportunities that completely overlapped:  The Radio City Christmas Show and Broadway productions of The Full Monty, Jane Eyre, & The Search for Signs of Intelligent Life in the Universe would all be in production in New York between August and December of 2000.  I asked Mark Menard & Nevin Steinberg if they were interested in forming a loose confederation of sound designers with me.

Has working at Artec Consultants affected your theatre (production) work?

Russell was right, I think.  My goal is to provide sound system designs and installations that exceed expectations.  Venue-specific system designs should out-perform touring rigs.  There is no evidence that this is generally the case in North America.

I’m a techie at heart.  I listen to a lot of music and am drawn to beautiful engineering.  Chris Jones – Roadhouses & Automobiles, produced by Stockfisch Records in Germany is a pretty spectacular recording.

Production Intercom in all its soul-crushing forms.

How about after?  Veal Parm & Penne Broccoli at Tony’s DiNapoli at Midnight.

18, upon meeting Bruce Odland at The Denver Center Theatre Co., and hearing what he was able to do with sound and music in the theater.

Complicated question.  They know that I love what I do and support me unreservedly on that basis.  Giving up production 10 years ago so I could experience my kid’s formative years in person got me a lot of brownie points.  Having dinner with my wife and kids and sleeping in my own bed most nights leaves me with no regrets whatsoever.

Bruce Odland’s work in Denver in 1981-83, working with Francesca Zambello on the opera Oedipus in Santa Fe, and the general creative chaos at the Yale School of Drama/Yale Repertory Theater in the late ’80s under David Budries’ wing.

I probably spent 2,000 hours editing 1/4″ and 1/2″ reel-to-reel analog tape with a razor blade in the early 1980s.  Samplers followed by DAWs changed everything. In the current millenium, the value of a 96k signal path with no superfluous conversions is edging us ever closer to analog… without the noise.