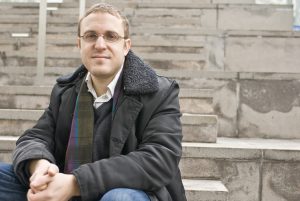 Josh Schmidt is considered a home town sound designer and composer by his Chicago, New York and Milwaukee peers. For the record, he calls Brooklyn home, although his design work takes him everywhere from Idaho to the Stratford Shakespeare Festival in Canada.  His musical adaptation of Adding Machine garnered him a Lortel and Outer Critics Circle Awards with its off Broadway production in 2008. He wishes there were more hours in the day: see why below!

My wife Amy Martinez-Miller is the most supportive and generous person I know. My family is very supportive. I have been lucky to have great assistants and associates (like Toby Algya, Ben Truppin-Brown and Rachel Spear), and also my designer peers never let me get away with any shit.

I have been obsessed with the entire recording output of STARS OF THE LID.

Lack of communication before money is spent. It is the road to hell on all fronts.

Usually something unhealthy. But when my wife makes me vegetarian enchiladas to go, those are the best.

21 – but I sorta got drafted into it. Not complaining though….

In the multitude of stupid mistakes both myself and others inflict upon the world.

I would teach history. Or sweep floors.

A new sense of value to our work and a network of  people “passing the torch” and all the knowledge that goes with it.