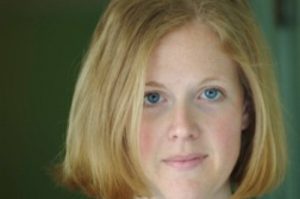 Annalise balances being a new mother, a love of burritos and the search for the ‘magical three’ in Portland, Oregon. Her favorite design credits include The Masque of the Red Death and Suddenly Last Summer with Shaking the Tree; Pool (no water) (Drammy Award) and The Long Christmas Ride Home with Theatre Vertigo; Crooked for Coho Productions, Locomotion, Charlie and the Chocolate Factory for Oregon Children’s Theatre; Mimesophobia for Sand and Glass Productions; and Find Me Beside You, Mutt, Restroom, for Many Hats Collaboration.  Annalise received an MFA in sound design from the California Institute of the Arts and has an MS in Educational Leadership from Portland State University. In addition to her theatre roles she is an education-based program manager with a local non profit social service agency. She lives with her husband, son and their five fuzzy critters.

We had our first baby in November, so at the moment I’m on maternity leave and working on learning how to be a mom.  This past fall I worked on a collaboration between two Portland theatre companies – Shaking the Tree and Profile – who co-produced Sarah Ruhl’s Passion Play.  We did all three parts in two separate locations over the course of a month, directed by the outstanding Samantha Van de Merwe.  It was quite an endeavor but a very rewarding one.  I’m also looking ahead to some projects for next season, including submitting a proposal with some fellow collaborators to co-produce a show in 2017.

There are so many great projects happening this year!  The Fertile Ground new work festival will be starting up in the coming weeks – I love being involved in and seeing new works.

I was born in Sonoma, California (though I mostly grew up in Ohio).  I’ve lived in Portland, Oregon for the last 11 years.

Two things come to mind.  First, anytime I get to work alongside my husband, Jeff, who is a lighting designer.  It’s such an easygoing, creative process.  Most of the time we don’t even have to talk about how our cues will interact – we’re just on the same page and have conversations like “is that cue going to…yes, like that…ok great.”  Second, there have been a handful of productions where I have been involved with the development of the project at every stage.  So often with a show I stop into rehearsals and meetings a few times leading up to tech, doing much of my work at home.  But in a few cases, I’ve been a full time member of the creative process – at every rehearsal, developing with the cast as we go.  While it’s incredibly time consuming and wouldn’t be needed or work well for every project, it’s such a rewarding experience to be that intimately involved with a group of artists on a journey.

My husband pushes and inspires me to take risks and grow as an artist – which is so important.  The Portland theatre community is such a supportive and tight-knit place.  I love getting to work alongside such amazing artists and friends.

As I mentioned above, I have a new baby, so for obvious reasons, I’m very into lullabies at the moment.  I’ve been discovering so many amazing lullabies from around the world – such beautiful melodies.  It’s wrapped me up in a very dreamy world these last few weeks.

I’ll answer this with a positive spin – I love when there is a strong production manager on board.  Having someone oversee the entire production and design side of a project is so key to everyone getting their needs met and things running smoothly leading up to and during tech.

Easy – burritos.  I am keenly aware of every burrito place within walking distance of any theatre I work with in town.

Yes – though I’m very out of practice.  I grew up playing violin, piano, and cello.  I also sang in the choir in high school and college.

College – probably around 19 or 20.  I loved being involved in theatre but was coming to the realization that acting was not my strength.  I had always been involved in music and was drawn to the music and sound in film, so sound design seemed like an obvious path.

I think I’m fairly fortunate in this area.  They definitely don’t understand all of the technical aspects, but overall they have a pretty clear understanding of the role I play in the collaborative process.  They come see as many shows as they can and are always asking great questions and pointing out things that stood out to them about my work.

I think I learn from other designers all the time – either seeing their work or spending time talking about approaches and tools.

It’s in the little moments – it could be a gesture an actor makes in rehearsal or a sound I hear on the street.  Often it’s a conversation with the director or another designer on the team where one comment can shape an entire idea.

I don’t recall a specific show.  I think it’s always been something that stood out to me in theatre.  I’ve always gotten very wrapped up in film scores as well.  And particularly when a design wasn’t great – it heavily impacted the experience for me.

ProTools, Qlab, iTunes, an internet browser for doing research or to look up nearby burrito options, and I usually have my iPad nearby with the Qlab app open.

First SFX and now Qlab.  I was initially very resistant to running a sound design with a computer program.  I was insistent that a computer couldn’t duplicate the artistry a human board operator could bring.  But I was forced to learn SFX while working for a theatre that used the system and once I started playing around with it and saw the potential I was hooked and haven’t looked back.  Then Qlab came along and basically changed not just the way the show is run but the way I (and many other designers I know) design the show in the first place.

My answer to this question probably changes daily.  Today?  I’d own a small book store.

Connection.  I’ve often thought about the fact that I don’t have many opportunities to interact with other sound designers.  For obvious reasons, we don’t typically work on the same shows, so I’m not only removed from designers across the country but those in my own town.  I also hope it highlights designers and design work being done outside of New York, LA, and Chicago and really gives a broader picture of the sound design (and entire theatrical) community.

What is the best professional advice you’ve ever received?

I worked with a director/mentor a long time ago who told me that when considering whether to take a project or a job you have to consider three things: 1. Who will you work with?  2. What is the project/job? 3. What is the pay?  He said that you will rarely be satisfied with all three answers, but if you are happy with two out of three, go for it.  This advice has served me well every time I’ve had to consider an opportunity.  I’ve worked on some amazing projects with awesome people that paid very little.  I’ve received decent paychecks and developed strong collaborations on projects that weren’t overly challenging.  And every so often, I’ve been fortunate enough to hit the magical three.