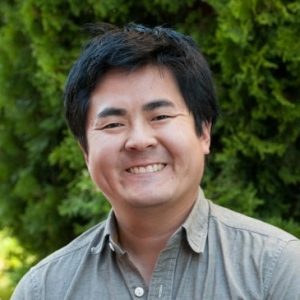 John Nobori establishes a ‘fast food base camp’ near tech and has a surprising take on delivering the mail!  A native of California, he has designed sound for the Oregon Shakespeare Festival, Cornerstone Theater Company, Musical Theatre West, Bootleg Theater, and the Rogue Artists Ensemble, where he is an Associate Artist.   John has been nominated for Ovation, Los Angeles Drama Critics Circle, and L.A. Weekly Theater Awards.

I am currently in early creative meetings with Boston Court discussing the first show of their upcoming 2016 season, Colony Collapse.  It’s going to be a great show with amazing opportunities for soundscapes and composition.  I’m also gearing up for the third annual Krampus Ball, which will occur in early December (no affiliation to the upcoming film).

I recently saw a production at The Matrix Theatre called DED!, sound designed by Jonathan Snipes with music composed by John M. Snyder.  The entire technical team did a superb job creating an immersive multimedia theatrical experience and I’ve been encouraging everyone I know to go see it.  The show runs through October 25th with a possible extension through November 1st.

Where were you born?  Where do you live now?

I live in Montebello, CA, not far from Pasadena, where I was born.

The creative team for Oregon Shakespeare Festival’s Water by the Spoonful was a powerhouse.  The director and all the designers had strong artistic concepts for the show.  Sometimes these ideas would clash and we would have heated conversations about the best way to proceed, but there was a strong sense of camaraderie and trust between all parties and we always worked it out.  Ultimately, we turned out a strong show whose design was as intellectually robust as the story was moving.

I have made many friends over the years of working in theater and it is always comforting to chat with friends over drinks.  My family is also supportive of my work.

I recently stumbled upon the moody, electronic music of Forest Swords.  Creepy and understated, but rich in atmosphere.  Check out the song, “Thor’s Stone.”

My pet production peeve is a panicky stage manager.  Tech weeks can be tough for all involved, but stage managers often set the tone for the whole room.  Luckily, I’ve worked with many amazing stage managers, so it’s not something that I encounter often.

I’ll usually establish a fast food base camp near the theater so that I don’t have to worry about being late to rehearsal.  Recently, that was Zankou Chicken in Pasadena, where I would ask for extra garlic sauce.

My primary instrument is nylon string guitar, but I more often use keyboards and synthesizers in my sound design.  I am very comfortable with the native soft synthesizers in Reason, and I recently designed a show that mostly used sounds I generated with a Moog Sub37.

Although I fell in love with theater in high school, I didn’t really understand what sound design was until the year after I completed undergrad, when I started working on small shows with friends in Los Angeles.  I was 22 or 23 at the time.  Once I realized that sound design was a thing, I knew that I wanted to be good at it.

My parents and brothers often attend shows that I design, especially when I ask them to.  They are very supportive and we have great conversations about the plays afterwards.  I’m very lucky.

My two sound design mentors are Tyler Stamets, who was the resident technical director at Rogue Artists Ensemble for many years and Brian Hsieh, who owns a production company in Los Angeles called DnB Design.  Tyler taught me how to use playback software (SCS at the time) and designed the systems of my earliest shows with Rogue Artists Ensemble.  Brian taught me everything I know about mixing and designing musicals.  He also taught me the importance of paperwork.  Both taught me the importance of beer.

Lately, I have been really inspired by music from television shows.  The industrial percussion and drones of shows like The Walking Dead and especiallyBreaking Bad are so visceral and exciting to me.

Although I had begun designing sound for theater before I started working with Rogue Artists Ensemble, my concept of sound was mostly utilitarian at first.  I didn’t understand how sound could take center stage until I was a production assistant on Rogue Artist Ensemble’s 2006 production of Victorian Hotel.  I recall the massive sound of an elevator door opening, which was represented by the back wall of the set cracking open.  I feel like I’ve been chasing the feeling of creating something huge with sound ever since then.  Sound for that show was designed by Tyler Stamets and Sean Cawelti.

Safari is always open because I am an incorrigible procrastinator.  Spotify and Airfoil are also often running.

Although it’s not a very original answer, QLab has revolutionized and continues to revolutionize the way I work.  Only now have I started to use the audio effects, time stretching, and microphone cues that were introduced the QLab 3 was released.  Having these capabilities built into QLab allows me to spend less time bouncing files out of Pro Tools and more time creating and fine tuning the sound.

There was one year that I spent daydreaming about being a mailman.  The idea of getting a lot of fresh air and listening to music while walking was appealing to me after so many days in dark theaters.

Although I’ve been designing sound for theater for many years, I haven’t developed relationships with many other sound designers.  I’m hoping that TSDCA will help create a platform for greater networking and solidarity, while alerting me to ways that I can help grow and strengthen our creative community.