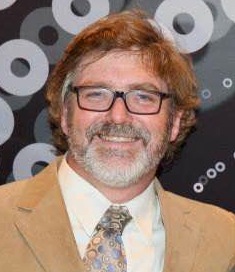 Drew’s designs runs the gamut: Sideways Stories at South Coast Rep, The Laramie Project at The Colony Theater, sound and control for the “Walking Dead Maze” at Universal Studios. He is the principal designer and owner of Diablo Sound, a sound design, show control and management company in Los Angeles with the great tagline “the devil is in the details”. Drew and Noelle Huffman just won an LA Ovation award for Sound Design (Large Theater) for Unbound Productions’ Wicked LIT 2014;  Drew’s accolades over the years include nominations and wins for Ovation, LA Weekly, Garland, LADCC and NAACP awards.  His work can also be heard in the dialogue recording and editing of Batman Beyond and The Justice League. He takes a break from his Christmas Carol tech to answer our questions below!

Right now I’m finishing up the remount of A Christmas Carol at South Coast Repertory.  This production is into its third decade, and I’ve been doing the sound design for the past 12 years. Diablo Sound also just opened the large background music installation in Beverly Hills which covers a large portion of the outdoor shopping district around Rodeo Drive.  That will be up and running through the end of December. Finally my company has an ongoing relationship with Universal Studios Hollywood Citywalk 5 Towers Stage where we handle the audio for all of the acts that perform. This never stops, and this weekend we have four bands playing over two nights, followed by the same type of thing every weekend through the holiday season.

I’m in the middle of the holiday season and I answer this, so there’a a million things going on that are so much fun. Since a lot of my work is in themed entertainment I’m always checking out those big projects like GrinchMas over at Universal Studios, or all of the amazing decorations and shows happening at the Disneyland Resort.

I’m a California native.  I was born in Torrance, and grew up near San Diego. I lived in El Cajon (East San Diego) from age 3 to age 18.

I live in a great little 1906 house in a part of Pasadena called Bungalow Heaven.

Part of what I love most about theater is the collaborative nature of it. The most rewarding and long term collaboration has been with director Stefan Novinkski.  We’ve worked together on shows ranging from a production of Fen at a tiny 99 seat theater through to Toy Story: The Musical for one of the Disney Cruise Ships. I always feel like we create wonderful work, but we can also just sit and talk for hours about anything at hand. There’s a huge level of trust there. I haven’t had as much of a chance to work with him since he moved to Texas for a teaching position, but I relish any chance we get to collaborate.

The top of this list is my wife Kristin. Together we can keep all of the pets fed, and the house from falling apart, but she’s also always got my back when it comes to the crazy hours and commitment that this job can take. The other huge part of this is my company, Diablo Sound. I started it almost 10 years ago, and I couldn’t do any of this without the team that has come together. My current full time team is Mark Johnson, Heather, Waters, Alex Mackyol, Fionnegan Murphy, and Ian Burch. There is no way I would be able to do my work without this team.

I do a lot of driving around Los Angeles, and right now I’m not listening to music, I’m listening to a lot of podcasts.  My current favorites are 99% Invisible, Marketplace, This American Life, Pop Culture Happy Hour, and Radio Lab.

Schedules slipping. It is so difficult for all the departments to stay on top of the overall show when something is getting behind. Things are so interwoven that if I’m counting on something being built, or something being in position before I can do a piece or work it makes things very difficult. It can be especially troublesome on the large non-theatrical installations I do, where I may have a large crew coming in to do a long day of work, and I find out nothing can be done because we are still waiting on the paint to dry, or waiting for power to be pulled into the location where we need it.

I like variety, so if I’m out of town I like to try a new restaurant of a food I couldn’t get at home. I also prefer to eat a little local places rather than the big chains.

I do not play an instrument. I played percussion in marching band in high school, and I was a singer long ago, and I’ve dabbled in a few instruments, but never to the point where I could do any real performance with this.  I do read music, and love it, I’ve just always been on the other side of things.

I’ve been doing theater of some sort since I was about five years old. Along the way I’ve been an actor, stage manager, lighting designer, technician, all sort of things. I didn’t land specifically on sound design until I was looking into grad school around age 24. From that point on there’s been no turning back.

My wife understands what I do, but I’m not so certain the rest of my family always understood. My mother and father were always very supportive, but no one in my family came from any sort of entertainment background, so they just didn’t have a grasp on this odd career I’d gotten into.

Mike Hooker took a chance on me when I applied to CalArts for my MFA. I think followed him out to CCM when he took a new job and that’s where I finished my degree. I’ve continued to work with over the years and to this day he is still someone I turn to when I need some advice or a sounding board. He pushed me hard in school, and then we crossed paths again when we were both working for Imagineering. I’ve hired Mike to do composition for me at Griffith Observatory, and he has brought me in to teach classes at UC Irvine where he is currently teaching. At this point he’s not just a mentor, but he’s a good friend.

Anywhere I can. Sometimes it’s something I hear in a movie, or a song on the radio. It can be a conversation with my students when I’m teaching, or reading the right book at the right time. I think my main job is just trying to stay open to inspiration whenever it hits and in whatever form.

I don’t think there was a specific show that brought me in, but there are certainly ones that stand out as affirming that I made the right choice. I designed a production of Side Show almost 20 years ago that just struck all the right chords and made me know that designing musicals always had to be part of my life. Right after that I designed one of the first productions of The Laramie Project in the Western United States, and I can still remember that feeling of being part of something bigger and more important than just a group of people in a theater. Those are the things that stand out to me.

Slack, Wunderlist, Numbers, Postbox, and Filemaker Pro when I’m at my desk in my office. At the tech table, it’s going to be some version of screen sharing, Sound Miner, and Pro Tools.

SFX 5.4 from Stage Research.  I started doing mainly computer based playback in theater in 1998 when there wasn’t a lot of it happening outside of some very big theaters with very large budgets. It completely changed the way I design, and my design process, from how I tech shows, to the way I pre-build my cues. I remember the days when all I could do was play a cue, then write down a note and tell the director I could work on it in the studio after the rehearsal and have something different for him to hear the next day. Starting with SFX I could make most of those changes immediately while I was sitting at the tech table. Now I use Qlab, SFX 6.3, and LCS in my work.  All of them are amazing at allowing sound designers to be creative collaborators.

I’d probably be in a tech field, most likely computer science or game design.

I hope that it can help bring sound designers together as a national community to give us a common voice, and also to allow us to laugh and learn with each other. I look forward to seeing some of those moments of inspiration coming from members of the TSDCA.

On top of running a business, you find time to teach.  Why?

Teaching keeps me honest. I love working with students, and when I’m interacting with them I have to model good practices and good behaviors. It also means I really need to be on top of my game, especially when I am teaching graduate students. There is never a time when I can let myself fall behind on new technologies or developments when I’m expecting to not just use them in my work, but also to teach them to students. It also allows me to see what the next generation of sound designers is going to bring, and that’s always really exciting.