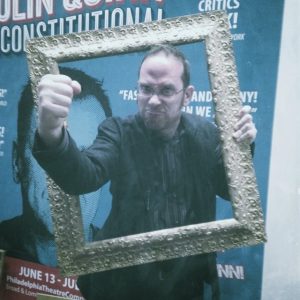 Cabinet maker, roadie for an 80’s hair band, voiceover artist: Bart brings these and many other skills to the table as a sound designer. He designs all over New York City, from Bloody Bloody Andrew Jackson on Broadway to The Ambassador at BAM. Collaborators include directors Erica Schmidt, Mark Wing-Davey, Lisa Peterson, Trip Cullman, Leigh Silverman, Sam Gold and Alex Timbers; his designs for the latter include fan favorites Hell House, Boozy, and Heddatron with Les Freres Corbusier.  Select regional credits include The Heidi Chronicles at the Guthrie, Humor Abuse at American Conservatory Theater and Downtown Race Riot at New York Stage and Film.

I’ve got two shows coming up. One for The Play Company with Maria Mileaf directing. It’s a very cool, unique piece that’s part love story/part murder mystery with lots of room for design. The other is a Christmas show that I’ve done for the past 7 seasons. The creator/director Mark Lerman changes the theme every year so it stays fresh and interesting.

In Jackson Heights, a ten minute walk from where I was born. (I’ve moved around some over the years but found a great place here and it works for me.)

I’ve had a bunch and wouldn’t want to put one above the rest. I feel the most successful collaborations come about when there is an open exchange of ideas with a vibe that we’re all contributing to a common goal. Looking back on a project and marveling at how great it turned out is so rewarding and it’s usually because of that focused effort of all involved. It’s also great working with directors and other designers when you’ve got a bit of history with them; you’re aware of each other’s sensibilities and talents and strengths. And mutual trust is key.

I definitely rely on my assistants and their knowledge. I often find out about a new system or piece of gear or simple keyboard shortcut from working with them. And my agent for the past 9 years, Kate Navin, is just awesome. Aside from looking out for my business interests, she’s got a great feel for taking good steps.

From gathering the preshow for Travels With My Aunt I found “It’s Getting Harder All Of The Time” by Wayne Fontana & The Mindbenders. Horribly catchy tune.

OH MY GOD I HATE PRODUCTION MEETINGS THAT DON’T BREAK UP INTO APPROPRIATE SIDEBARS!!! Sorry for yelling. But wow that’s the worst. My favorite words in the world: nothing for the group.  Oh, and scroller fans that don’t have a low speed setting.

Fish Tacos. And pizza is never a bad thing.

I play guitar mostly but I’m working at getting better on the keyboard. I play bass and drums only well enough to do a basic sound check.

I was in my mid late twenties. I knew sound from working with bands for years but didn’t know about sound design for theater. It was when I was acting in a show that needed a complicated cue sequence that I figured out how to make it work. I became the sound designer. And then I started getting offered gigs. I loved the work but didn’t pursue it as a full time career until about ten years ago.

Kinda…? Pretty much they do now. I never questioned them “what is it that I do?” but based on the development of my mom’s questions and comments over the years I get the sense that she’s pretty much got it. One brother works in AV tech now and was a TD years ago. He gets it. My other brother sees more theater than I do but usually, after seeing one of my shows, compliments me on the script, the acting, the lights, the set, the costumes, the cleanliness of the ticket booth and the brightness of the aisle lights before quietly grumbling out something nice about the sound. Ah, brothers.

I didn’t. I pretty much learned from doing. I learned from seeing what works and what doesn’t. I sometimes regret that I didn’t assist for anyone to see how someone else works. By the time I decided to do this full time I was already a “Designer” and I would have been a horrible assistant.

On a specific show it’s definitely the director that I look to first. It sounds obvious but I’ve had talks with grad students who were taught to have fully formulated ideas about their design before even speaking with the director. That sounds crazy to me. Do research. Know the background, the time period, the location, the technology…all that. Then meet with the director as early as possible to find out where they’re taking this production and let the research inform and inspire the design afterwards.

Inspiration in general? Clicking on “Related Artists” and following that path for a while. New sample libraries, new software. Good people.

My first show once deciding I was going to be a Sound Designer was Boozy… for Alex Timbers. It was so much work. It had a ton of sound effects, music edits, I composed a bunch of underscoring, mostly hung my own rig at The Ohio Theater and it paid like crap. I was so proud of that show. Being surrounded by so much talent and energy was an undeniable thrill. That pretty much sealed it for me.

Without question SFX 5.6. It unlocked so much potential for sound design. I no longer needed to compromise the design based on what a board op would be capable of consistently achieving. QLab 3 is amazing and I love and am amazed by what it can do but the biggest jump was definitely in getting away cassettes, CDs and MDs.

Because I started relatively later in life, I’ve done other things. I was a cabinetmaker for years and I sometimes get to do that still. I was a voiceover actor – that’s a lot of fun. Either of those would be a good jumping point.

“I don’t know…what are the hours?”

I’d love to have this group be part of a support structure for all of us. There are a lot of good ideas in the world and tapping into or contributing to a resource like this could be amazing.